Three Projects to Get You Started with Serverless in 2019

Serverless is all the rage. Ever since AWS Lambda was announced at re:Invent 2014, there’s been an explosion in the serverless space. We’ve seen more FaaS offerings, more event sources, more managed services, and more pay-per-use pricing models.

Serverless has unlocked a whole new world for developers. But how do you get started? Because serverless is so new, it requires learning new patterns and skills.

In this post, I’ll cover a few categories that I see as good entry-level projects with serverless. It’s kind of like having your training wheels on — you get used to the motions and how things work without making a big bet with your core business applications.

There’s a little something for everyone. In this post, we’ll cover:

Extending AWS with Lambda and the Boto3 SDK

If your job title is ‘Infrastructure Engineer’, ‘Cloud Architect’ or anything else that requires bookmarking the AWS documentation, you probably see little holes in AWS offerings.

Perhaps you want to schedule periodic backups of your EBS volumes or DynamoDB tables, something that wasn’t possible until the recent addition of AWS Backup in early 2019.

Or maybe you want to scale up your DynamoDB throughput early in the morning before your traffic spikes, then scale it back down at night to save money.

Or you want to terminate all instances in your development account that have been running for more than 7 days.

While you wait for AWS to add these little features, you can fill the gaps yourself. One popular way to do this is to trigger AWS Lambda with a CloudWatch Event on a given schedule to run bits of arbitrary code.

This is the ‘gateway drug’ to AWS Lambda for a lot of operations folks. You don’t need to pay for a full-time server to manage your cron jobs — you can run it basically for free with AWS Lambda.

Tools of the Trade for Ops projects

Want to learn more about Serverless for Operations?

Sign up for my free 5-day email course on easing your operations workload with serverless.

This project is aimed at the other side of the Wall of Confusion: web developers. 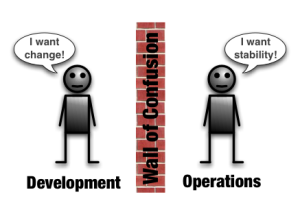 If you’re a web developer, you don’t want to mess with operations. You just want the dang thing to run so you can focus on building.

This has led to the rise of tools like Heroku and AWS Elastic Beanstalk which aim to make it as easy as possible to run web apps.

However, with Heroku and Elastic Beanstalk, you’re not entirely out of the ops game. You still need to capacity plan to determine how many instances you want to run. Further, you’re paying for these instances regardless of the amount of traffic you have on them.

If you run your web application on AWS Lambda, those concerns go away. The compute layer is infinitely scalable, and you pay only when your application is being used.

Further, with the tools below, you can convert your existing application with minimal changes.

Using existing web frameworks in Lambda isn’t ideal — you’re not embracing serverless as fully as you should — but the downsides are overstated. For web developers new to serverless, this is a great on-ramp to see the magic of serverless.

Just make sure it’s an on-ramp and not a final destination 😉.

Below are a few good articles for using AWS Lambda with existing web applications:

Tools of the Trade for Web Apps

As mentioned in the Operations projects, you should use a Lambda deployment tool to make it easier to deploy your projects. Two popular ones are the Serverless Framework and AWS SAM.

Handling a webhook from a third-party SaaS

A third example project is to handle a webhook from a SaaS solution. This could be:

While this is architecturally similar to the previous example (setting up HTTP endpoints using API Gateway & Lambda), I think this use case is a better on-ramp for future serverless usage for a few reasons:

Tools of the Trade for Webhooks

In addition to AWS Lambda and the Lambda deployment tools mentioned in previous sections, you should also check out:

Sign up for my free 5-day email course on handling webhooks with serverless.

Serverless applications are making it easier and easier to build powerful applications. Yet ramping up with serverless can be a daunting experience, particularly for those without significant experience with cloud infrastructure.

The three categories of projects in this post are great ways to get acquainted with serverless. For each of them, they can solve a key pain point without re-platforming your entire production infrastructure.

Are there additional projects you’d like to hear about? Reach out and let me know!